Where are all the Dads? by Captain Harold Browne

Where are all the Dads?
by Captain Harold Browne
We live in an age and society where Fathers are no longer there or are considered unnecessary. Recently, I read an article that the GREATEST need in our churches is for fathers. That article confirms our experiences in CSB. The single-parent family led by a mom seems to be the norm even in the evangelical church. This places our ministry in a unique and challenging position. As Brigade leaders, we need to be fathers to the boys and young men the Lord has entrusted to us.

When I started in this ministry many years ago, I was not a father. Since that time the Lord has given me four sons, three beautiful daughters-in-law, three grandsons and five granddaughters. In addition, I have literally hundreds of sons through my ministry in CSB. I consider each one of these Brigade boys as part of my family. They are now scattered around the world serving God. Clearly some of them I know better than others. Many of their names and faces come to mind often, others just occasionally. They include: Steve, Andrew, John, Anil, Arvind, Ben, Jeff, several Peters, Jims, Marks, and the list goes on… 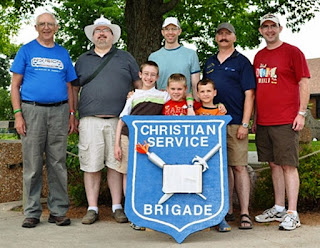 Many of them are missionaries, pastors, church leaders, community leaders, businessmen, and even a former Deputy Prime Minister. Most of then are ordinary dads.

What did I do with those fellows to be like a dad to them?
Often, it was very ordinary things. I would get together with them regularly at fun gatherings, called Brigade meetings. I would talk with them and even do that strange thing, called “Checking their Achievements”, participating in games with them, and even sharing God’s Word with them. On Sundays at church, I would even greet them with a smile, and with a verbal greeting. To this day whenever we encounter one another, they almost always initiate greetings and brief conversations. Then there were those adventures, the fall hikes in Gatineau Park, the campouts by the St Lawrence, the weeks at Camp Kakeka, and the hockey games where everyone got to play. The most memorable events of all were the Noncom Conferences, Anniversary Campouts with other groups from far and wide. Through many of those experiences, my four sons were there and I was able to combine being their dad with being the father to the other fellows, as well.

Many years ago, CSB introduced a program called Tree Climbers. It was intended to provide an opportunity for Dads to have a regular time of doing stuff with their young sons. Our church immediately adopted it as part of our ministry. One of the important practices that was established early was that virtually every dad who had a son in the group was expected to attend regularly. I was one of the exceptions as I had just taken over the leadership of our Battalion. So, my son recruited his own “dad” for that night. That man had been one of my Stockaders. To this day they are still close friends.  Currently, with the exception of a couple of older men, all of our other Tree Climber leaders are Dads. We often expect that when sons graduate from one group to the next, their dads move up with them. For boys with no dads in the home, we recruit a few godly men from the church to serve as dads for the night. Dads are the key to the success of our church’s ministry to boys and young men.

If we are to achieve our mission of Building Godly Men of Today and Tomorrow, we need be like fathers to all our boys, especially to those who don’t have a dad near them regularly.
A Challenge to each of us from the Apostle Paul to his spiritual son Timothy
“You then, my son. be strengthened by the grace that is in Christ Jesus, and what you have heard from me in the presence of many witnesses entrust to faithful men, who will be able to teach others also.” (2 Tim.1-2) This is my life verse in CSB.

This 4-generation principle works. Paul - the pastor to pastors; Timothy - the pastor; faithful men - the Dads or Brigade leaders; and others – the boys. As I have been around this ministry so long, I have seen some of these boys become faithful local leaders. Some have become pastors in local churches, and some have become denominational leaders and leaders of missions.

Become a Spiritual Dad to your own sons and to those boys that the Lord have entrusted to you in the ministry of Christian Service Brigade in you church and community. Your Church needs YOU.