The group of hikers left the valley floor, moving with grace and energy. The huge mountain towered before them in the early morning sunlight, but their confidence was too high to be discouraged by its height. They chattered and laughed as they slipped into single file up the easy slope. But not for long. As the trail became steeper, they began to fall out of line—for a rest, for a drink, some even to turn back.

CRUCIAL DECISION
Then at a scenic viewpoint, the leader called a halt and took stock of his group. The ranks had been thinned considerably. The weak, the ones who lacked desire, the easily-distracted were missing. And it was obvious that only a few would reach the peak. Should he stop here and wait for the stragglers? Or even go back for them? Or should he choose a lower height? Or press ahead toward the top?

If he waited or turned back now, some of the hikers would be denied the accomplishment they sought— scaling the peak. Yet, as a responsible leader, he could not abandon the stragglers. Moments later, the decision was made. An assistant was sent down the trail to find the stragglers and bring them up as high as they would go. But the rest would go on!
First one dropped out with a blister, then another. As they climbed higher, the thin air hindered some. At last, only a select few stood on the mountain peak with their leader. But they stood there with satisfaction, knowing they had reached their goal.

ANOTHER OPPORTUNITY
The Chief Ranger’s or Captain's opportunity with CSB Achievement is quite similar to that of the mountain climber. The Achievement program is designed to help a boy or young man grow toward maturity in Christ, starting with Builder and Sentinel Trails, and moving through the Battalion Observer to Three Star, and ultimately to the Herald of Christ. Growth toward maturity is not attained in some haphazard way. The CSB Achievement program is an intentional plan that Christian men can use to help boys and young men grow systematically and at maximum velocity.

Though most young guys want to "grow up", today's sense of "entitlement" has the same effect on Achievements that a steep grade has on hikers. The Stockade and Battalion leader's challenge, then, is twofold:
1.      Maximize growth, and
2.      Maximize participation (and reduce dropouts).

MAXIMIZING GROWTH
How can a leader of boys and young men help them to grow? This is a tough question with few easy answers. However, built into the CSB Achievement program are several features which can help:
a.      Set goals and objectives,
b.      Make plans to meet those goals,
c.      Do what is necessary to meet the goals, and
d.      Evaluate their plans and experiences against the goals.
Hence, when the leader and Brigadier are together, the planning and setting of goals need to be as much of a priority as the completing of the Achievements.

Achievement in Christian Service Brigade is geared to a boy’s and young man’s interests and abilities. The Trail Guides include space and instructions for this, and the Achievement record pages are designed for planning. As the boy and young man compares his EDC or Target Date to his Date Completed, he can evaluate his progress, as well as his planning abilities.
MAXIMIZING PARTICIPATION
While it requires diligence and wisdom to lead the few who will climb to the top of the mountain, motivating wide participation requires patience and imagination. The man who is sent back along the trail to encourage those who are lagging behind has a special challenge. Here are some tips to make this task more attainable.
Will these tips guarantee success? No. Of itself, no system can change lives. But prayer, loving concern and the Holy Spirit can take these techniques and infuse them with vitality—with amazing results in the lives of young men. Now, off to that far-away mountain peak...
Posted by CSB Canada at 10:23 No comments:

Men’s Ministry Meets Social Distancing - from Man in the Mirror 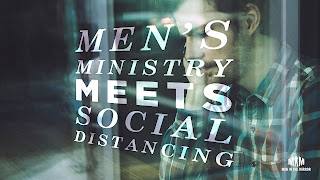 We all share a fundamental understanding that the church isn’t a building—that the body of Christ isn’t defined by or confined to four walls, a roof, and a steeple. This season of uncertainty and difficulty surrounding COVID-19 presents endless opportunities to demonstrate this in how we care for and love those in our communities.
And yet, it also presents challenges in continuing to minister to the men around us, as millions of people are social distancing or sheltering in place.
In the absence of four walls, a roof, and a steeple, how do you disciple men effectively, especially when they may be anxious, isolated, sick, or fearful?
We want to equip you to overcome those challenges and thrive in the spirit of Hebrews 10:23-25 (NASB): Let us hold fast the confession of our hope without wavering, for He who promised is faithful; and let us consider how to stimulate one another to love and good deeds, not forsaking our own assembling together, as is the habit of some, but encouraging one another; and all the more as you see the day drawing near.
In this post, we’re going to introduce you to five resources you can use right now in your ministry to men. And at the end, we’ll share some tools that will enrich your experience and make online community easier.

Click here to read the rest of this excellent article on the Man in the Mirror Blog...
Posted by CSB Canada at 10:23 No comments:


Interesting times! The things we are experiencing as a world are very rare – and while experts have been talking about the threat of pandemics for years, it is another thing to actually have it here, upon us, to live in it and through it. As a pastor, it brings Revelation to life in the sense, “Oh, I see how that could happen.” I am NOT saying we are in the times of Revelation; I am saying we are in very unique times. And we who are followers of Christ, who have a worldview that includes a Creator God, a Sovereign Lord, we don’t worry or allow anxiousness to lead us, because we have a God who has our back. He is in control, and there is nothing to fear. Like Daniel’s friends, we can say, “King Nebuchadnezzar, we do not need to defend ourselves before you in this matter. If we are thrown into the blazing furnace, the God we serve is able to deliver us from it, and he will deliver us from Your Majesty’s hand. But even if he does not, we want you to know, Your Majesty, that we will not serve your gods or worship the image of gold you have set up.” Whether a manmade or natural disaster, the God we serve is able to deliver us from it!

The challenge before us, then, is what will we do in these days? There is a great need for men today, real men. Men who can stand firm with courage and set an example for others to follow. Men of compassion who can help those who are struggling. Men who stay the course and are not distracted by the things around them. Men who accomplish the task of the Kingdom, rather than focusing on self and how they can benefit from it. It is an age of Heroes!

Do you hear the call to make a difference today? Canada needs you - the world needs you. Immerse yourself in the Scriptures, talk to God often in prayer. With spiritual disciplines as your foundation, and the leading of the Spirit as your Guide, continue on in the ministry before you. For some of us, it may be from our homes, and the availability of strengthening our connections with our spouse and/or children. It may be finding ways to do Stockade digitally. It may be encouraging our pastors, many of whom are preaching to empty seats. It may be regularly calling a neighbour who is isolated and alone. It may be working long hours in the health sector or driving a truck to keep the supply chains operating.

Heroes take initiative. Heroes hold to strong ethics, while focusing on those who need help. Heroes march to the beat of an internal Drummer that leads them forward with integrity. Heroes stay the course, with obedience and dedication. Today is the day for you to step up and be the hero your world needs.
Posted by CSB Canada at 10:23 No comments: