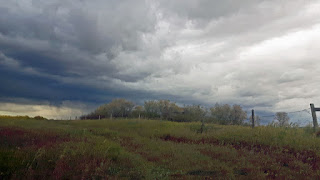 In late September, the staff of CSB Canada had the opportunity to visit the Brigade Unit in Waldheim, Saskatchewan. It was Waldheim's second meeting of the year and the Stockade was having a barbecue on the banks of the North Saskatchewan river.


After a beautiful sunny day, the skies filled with classic prairie thunderheads. There were 55 boys and about 30 men heading for a cookout, wide game, and campfire Story Circle. What would we do if it decided to rain? 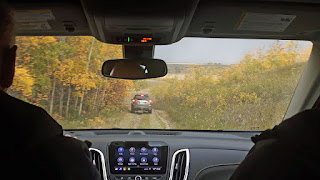 The drive to the river was interesting. We left town on a paved, two-lane highway, then quickly turned onto a gravel road. Then we turned onto a farm road. That road became two worn tracks through the grass. The roadbed was good and soon we were leaving the fields to go down to a broad level area beside the river. 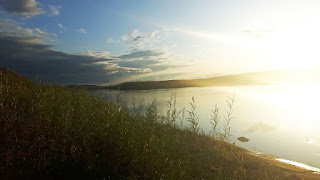 Several cars and trucks were there ahead of us. The campfire was burning and the BBQ was fired up. Hotdogs and hamburgers were being cooked. The boys were busy exploring. The Chief Ranger, Greg Willems, realized that he had left something in his truck and made two steps towards it. "Nope," he said. "It will be pouring before I get back." He was right, so he gathered the boys and men under a large tarp. It poured. 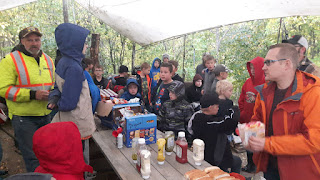 It was time to organize the Stockade, so the Chief Ranger and the Brigade Coordinator, Scott Langelaar, read out the Post assignments. The boys could ask for a change, but as the guys crowded around their Post Rangers, everyone was pleased with the results. It was time to eat. We had our hotdogs and burgers, chips and pop. There was ice cream for dessert. 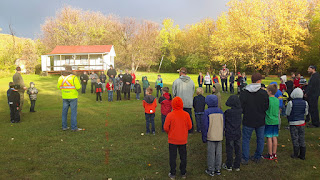 The rain stopped and the boys were called to assemble in the big field. The boys and their Rangers got to speak to each other. Then the Chief Ranger called, "Build the Stockade." 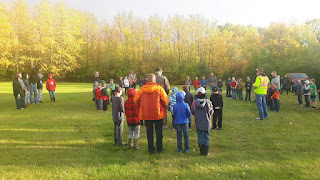 The boys formed their Posts. With 55 boys, the corners of the "Stockade" were double-walled... and there were Posts between the corners. In quick order, the Stockade was ready. The Chief Ranger called for the "Stockade Sign", and then "Stockade Silence", and he led in prayer. Instructions were quickly given, and the boys were dismissed to the games. 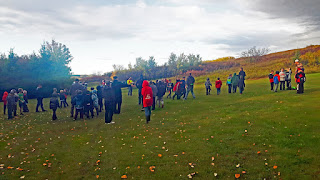 A wide game was already laid-out for the evening. Lines had been spray-painted on the grass, safe-areas identified, jails established, and six stakes driven into both flag area. Teams were organized. Rules explained. The widegame began. 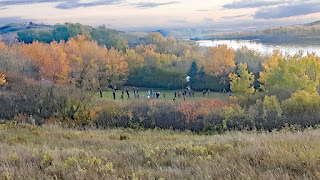 There on the shores of the North Saskatchewan, the men and boys of Waldheim played Capture the Flag. The boys were pumped. Flags were stolen and recaptured. Prisoners were captured and long lines stretched from each prison to a willing saviour. Jailbreaks were common and swung the momentum of the game. 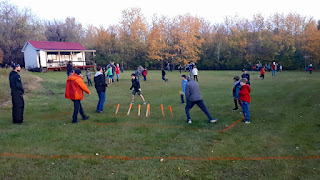 Three rounds were played. The leaders played with the boys and their presence made all the difference. They helped direct the charges. They captured flags. They captured prisoners. Sometimes, they found themselves captured, sparking their opponent's jailbreak. They are good examples of how to play. 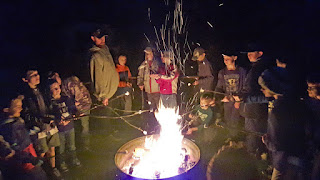 It got dark. It was time for the marshmallows and hot chocolate. Roasting sticks were cut from the ample brush. Everyone was having a good time. 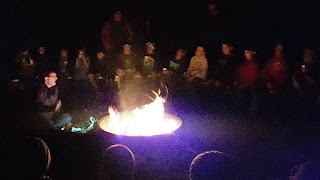 Steve Grove, the President of CSB Canada, was introduced and he sat down beside the fire. He paused as the boys gave him their attention. "I was born lame. And for as long as I can remember, I've been carried here to the Temple gate to beg from passersby." He spoke of the lame beggar who was healed in the Name of Jesus Christ by Peter and John. It was a good story and it captured the boys attention.

The evening closed, and the boys and men drove back to the church. It was surprisingly close by. It is their practice that, once the boys are picked up by their parents, the leaders gather for an extended Leaders' Huddle. Their Battalion leaders join them - they had 29 young men that evening - and they discuss how things went, their plans for the next week, their long-term goals, and their big events and special activities. They pray, seeking God's guidance for their Brigade.

The Waldheim Brigade group is a joint effort by the men of Salem Church and Waldheim MB Church.
Posted by CSB Canada at 22:15